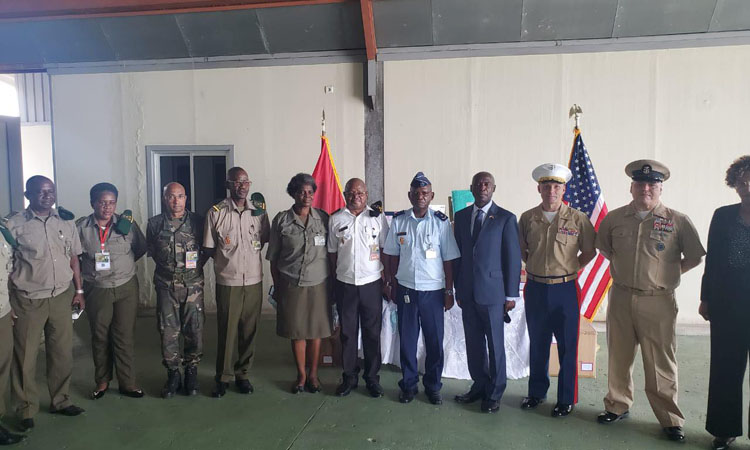 It is my honor to be here today to donate $150,000 of personal protective equipment from the United States for the regional military hospitals in Lubango and Huambo.  I would also like to recognize the support of the United States Africa Command for facilitating this donation.  The U.S. Department of Defense has funded various projects in medical community to include the donation of a field hospital open to all patients, COVID-19 test kits, and training courses for first responders.  This is a partnership that has ranged nearly 20 years and began with assistance in controlling and treating HIV/AIDS.

This small donation is an important part of over $38 million dollars from the United States’ people for COVID-19 support in Angola.   While we may be seeing an overall reduction of COVID-19 cases here in Angola and the rest of the world, we must remain prepared against the resurgence of other variants.  The materials donated today represent not only a commitment to the current challenges we face, but also the United States’ commitment to work together with Angola to be prepared for future challenges.  As a top priority of the Biden Administration, we will continue to work together to eliminate the challenges of COVID-19 and to support the Angolan Government in this endeavor.

The United States continues to have a fruitful relationship with the Armed Forces of Angola and uphold its long-standing commitment to combat the spread of infectious disease through a collaborative partnership based on mutual respect and trust.  This is one of many areas of shared interest, where we continue to forge strong and lasting relationships.

In closing, I would like to reaffirm the willingness of the US Government to strengthen and improve the quality of health services to combat and control the spread of COVID-19 and other infectious disease, working with our willing and capable partners, the Angolan Armed Forces and the Military Health Services Directorate.