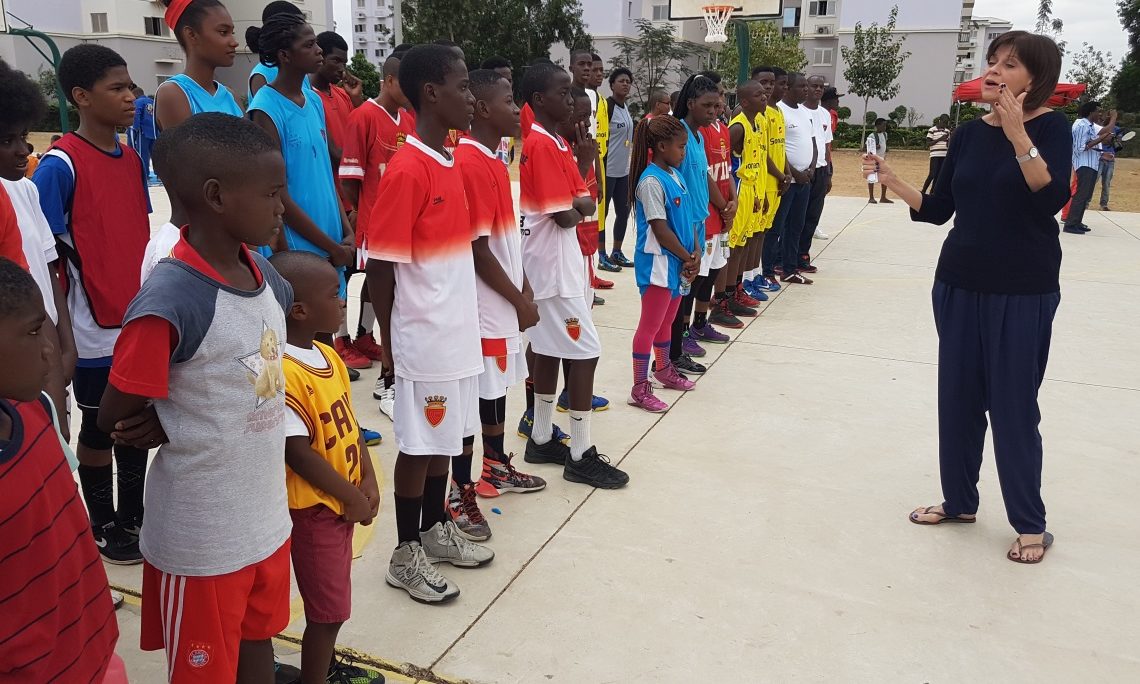 Luanda, Angola – The United States and the Republic of Angola welcomed the visit to Luanda of two former National Basketball Association (NBA) and Women’s National Basketball Association (WNBA) athletes as a part of the U.S. Sport Envoy Program. From August 26-29, Mr. Jason Collins (NBA) and Ms. Jenn Lacy (WNBA) carried out various philanthropic activities and basketball clinics with youth in Luanda, under the theme “Overcoming Challenges through Sports.”

In partnership with the Angolan Basketball Federation, Collins and Lacy conducted another basketball clinic for boys and girls aged 12 to 17 years and Angola’s Paralympic basketball team on Saturday, August 27 in Kilamba. U.S. Ambassador Helen La Lime attended and interacted with the young participants while they learned both basketball and life skills.

The Cazenga municipality also received attention from the American athletes. On Monday, August 29, 50 young boys and girls from Cazenga English Friendship Youth Club, a U.S. Embassy partner, took part in a basketball clinic. During this event, the athletes also discussed the importance of sports, their experiences as student athletes and the benefits of learning English. This event was carried out in partnership with XMEX organization, a sports facilities management company.

To further the U.S. policy of social inclusion and respect for diversity, the two former athletes led an anti-stigma discussion with the Lesbian, Gay, Bisexual, Transgender, and Intersex (LGBTI) community and allies of Angola, in partnership with the LINKAGES Project on Monday, August 29. This event aimed to support the elimination of stigma and discrimination as a barrier to human rights of the LGBTI community. The LINKAGES Project is a cooperative agreement funded by USAID under the President’s Emergency Plan for AIDS Relief (PEFAR) whose main goal is to reduce the stigma and discrimination to safeguard human rights as one of the main barriers to access health care.

The two former NBA and WNBA athletes came to Angola under the United States Department of State’s Sports Envoy program, which aims to promote mutual understanding between people through sport. For more information, please contact the Public Affairs Office of the U.S. Embassy in Luanda, via e-mail at pressluanda@state.gov or phone 222-641-000.