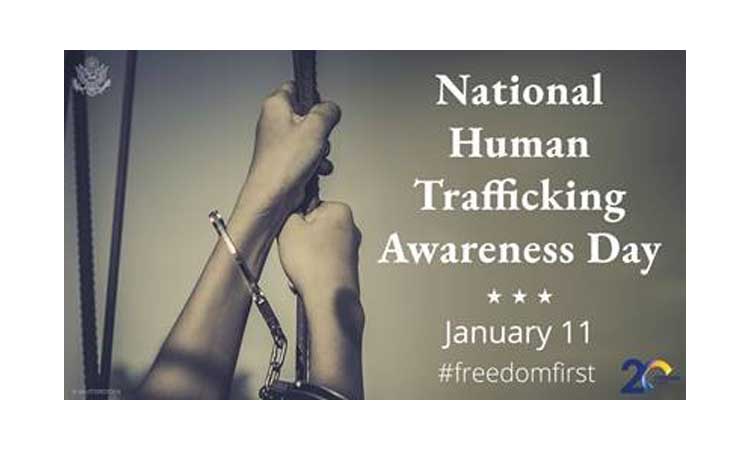 President Trump has proclaimed January as National Slavery and Human Trafficking Prevention Month. Global estimates indicate that as many as 24.9 million people – adults and children – are victims of human trafficking. Traffickers deprive their victims of the ability to exercise their unalienable rights of life, liberty, and the pursuit of happiness – an affront to our nation’s founding principles.

This year marks the 20th anniversary of passage of the U.S. Trafficking Victims Protection Act of 2000 and adoption of the United Nations’ Palermo Protocol to Prevent, Suppress and Punish Trafficking in Persons, Especially Women and Children. These two seminal instruments gave rise to the global anti-trafficking movement. Today, they still demand the urgent attention of all governments to combat human trafficking.

In commemoration, the Department of State declares 2020 the year of “Freedom First,” in recognition that human dignity, autonomy, and freedom are essential to the exercise of our rights and liberties. Delivering on unfulfilled promises of freedom for the millions of people whom traffickers exploit must remain a first priority for us all.

Throughout the past two decades, the United States government has remained steadfast in its commitment to bring to justice those who profit from the exploitation of others, to ensure victims are identified and receive trauma-informed support services, and to prevent traffickers from committing this crime in the first place. For its part, the Department of State is committed to intensifying our global efforts to end human trafficking through year-round bilateral and multilateral diplomacy, targeted foreign assistance, support for the coordination of federal anti-trafficking efforts, and meaningful engagement with civil society, the private sector, and trafficking survivors.

Today, on National Human Trafficking Awareness Day, I ask that you please join me in taking up the President’s call to “tenaciously pursue the promise of freedom for all victims of this terrible crime” and join us as we redouble our efforts in the year 2020 to prevent exploitation, prosecute traffickers, and protect survivors of human trafficking.