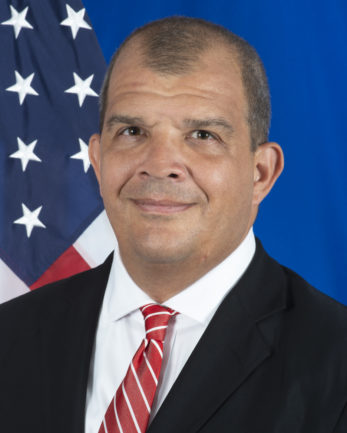 Greg Segas is the Deputy Chief of Mission in Luanda, Angola. From 2016-2019 he served as Nonimmigrant Visa Chief at the U.S. Consulate General in Sao Paulo, Brazil, where his team processed over 1 million visa applications during his tenure. Mr. Segas joined the Foreign Service in 1999, and has also served in Honduras, Azerbaijan, Colombia, Libya, and Washington, D.C. in consular and management positions, and Mexico, where he was Principal Officer at the U.S. Consulate General in Merida. He is the recipient of several superior and meritorious honor awards. A native of northern California, he worked in restaurants and the wine industry prior to joining the Foreign Service. Mr. Segas holds a Master of Strategic Studies degree from the Air War College, an MA in Geography from the University of Washington, and a BS in Foreign Service from Georgetown University. He speaks Portuguese and Spanish, and has studied Russian, Arabic, Turkish, Uzbek, and Italian. His wife and two children, who also arrived in August 2019, join him in Luanda.