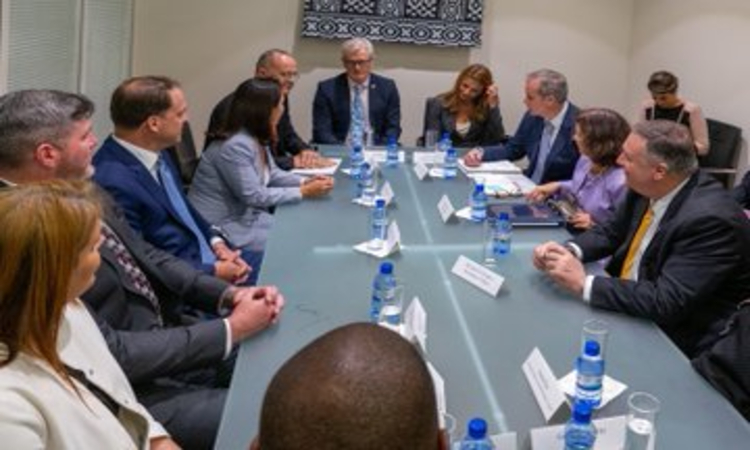 SECRETARY POMPEO:  Good evening.  Thanks (inaudible) Angola at the U.S. (inaudible), thanks for hosting me.  I had a chance to sit down with a handful of business leaders here.  I do this as often as I can, I travel around the world (inaudible).

One of the reasons I wanted to be here in Angola is (inaudible) come to this place and to (inaudible) this opportunity.

A few weeks ago someone asked me what surprises me the most when I travel around the world.  I have to tell you it’s the absolute level of corruption around the world that I see.  Americans, I think, mostly take it for granted we know our system, we don’t see it.  It’s pervasive in too many places.  Countries always want more American investment, because it comes without that, it comes in a fundamentally different way.

You all see this too, if you travel internationally.  Corruption is the enemy of a nation’s growth and progress.  Here in Angola, damage from corruption is pretty clear.  I spoke with the President today.  I was unabashed in talking about the work that he has done, and the work that needs to continue to be done.

With every group I meet, journalists, young entrepreneurs – I met with some young female entrepreneurs today – with government officials, business leaders, I urge them in that: clean, transparent transactions.  The culture of impunity is destructive to economic growth and the well-being of the ordinary, Angolan people.  This country has been held hostage of that corruption just for far too long.

I could see the promise, and when I talked to business leaders I could see the work that remains to be done.  When I was with the foreign minister back in August, we talked about this.  I just had the chance to meet some of the impressive ministers, too, who have the task of executing this incredibly difficult mission to increase financial transparency and combat corruption.  I believe, I have confidence in you.  And you should have confidence in American businesses, too, that we will be by your side in delivering that level of excellence and rule of law and standards.

Look, we’ve always had a significant energy presence here, and that energy presence is growing, and that’s great.  We’ve got a group of energy companies that are going to put more than $2 billion into a natural gas project.  That is fantastic.  That will redound to the benefit of the American businesses, for sure, but to the Angolan people, for sure, as well.

This reform agenda that the President has put in place has to stick.  It has to continue.  If we get that right, collectively, there will be more deals, financial institutions will return.  All of the things that will drive jobs and wealth creation for the Angolan people will be in place.  We’ll do our part to help the Angolans achieve prosperity.

Some of you may be tracking — others not – the new Development Finance Corporation that kicked off.  It’s now less than 45 days old.  Our – it’s focused on catalyzing private investment in developing countries in key sectors like agriculture and infrastructure and energy.  Much of that capacity, about $60 billion in capacity – this is a real-deal program – much of that $60 billion in capacity will be available for Africa.

You all know the history, too, of Prosper Africa.  That’s an initiative that is growing trade investment.  The United States and Angola are also restarting our energy dialogue.  We’ll do that again in June.  Power Africa 2 has always proven important.  We helped Angolan electricity companies in 2019 prepare for a $530 million African Development Bank loan to connect what had previously been separate electricity grids.

The White House, too, is doing its part with the women entrepreneurs through the Women’s Global Development and Prosperity Initiative.  This morning I met with some of these women.  They were amazing, talented, dedicated.  They could see the challenges that their small businesses faced, but they could also see that, if they got it right, the opportunity was there.  Each of those businesses, too, had a social component.  They were trying to not only do good for themselves, but do good across the broader Angolan landscape.

The United States was important in many of those people’s lives, whether it was fellowships through our IVLP program at State Department, or otherwise.  But we have every reason to grow our two countries together, and grow our cooperation more closely.

I spent a good part of my life as a small businessman before I lost my mind and ran for Congress – (laughter) – about 10 years ago now.  I know what you all are dealing with as you’re trying to grow your companies, your businesses, your opportunities, your market share here in Angola and in Africa.  Make sure you stay close to what we are doing at the State Department.  We are here to try our level best to assist you in being successful.  And for those Angolan leaders here today, know that we are committed to maintaining this effort, as well.

We want to be good partners here for the Angolan people and for the transitions that are taking place here in Angola.  I know we can achieve that together.  I really appreciate you all hosting me here today.  It’s been a delightful visit, and one that I will remember for an awfully long time. Thank you all very much.  (Applause.)