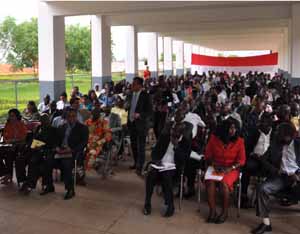 As part of its national education and media outreach program, Public Affairs Office of the U.S. Embassy in Angola is carrying out several activities to promote education in the United States. On Monday, June 1, Public Affairs Officer Jeffrey Lodermeier spoke to two different academic audiences in northern Uige province to address two issues of interest to Angolans: An Introduction to the U.S. and education opportunities there.

The two events generated huge interest within the academic community of Uige province, having congregated about 700 students and teachers from different faculties of the public Kimpa Vita University. Issues regarding the U.S. elections, U.S. Foreign Policy making process, scholarships, exchange programs and education cooperation protocol were among others the most asked questions from the audiences.

Organized in partnership with the Government of Uige province, the two lectures helped the Embassy to share vital information about education exchange programs, such as YALI, Fulbright, Humphrey, SUSI and several others in order to diversify and broaden the origin of candidates for these programs.

At the end of the presentations. participants asked many constructive and intelligent questions. The number of participants in both cases was so high that all the materials on the subject matter were completely used up. Both students and teachers asked the Public Affairs Officer to come back often as they want to make the province of Uige the academic capital of Angola.